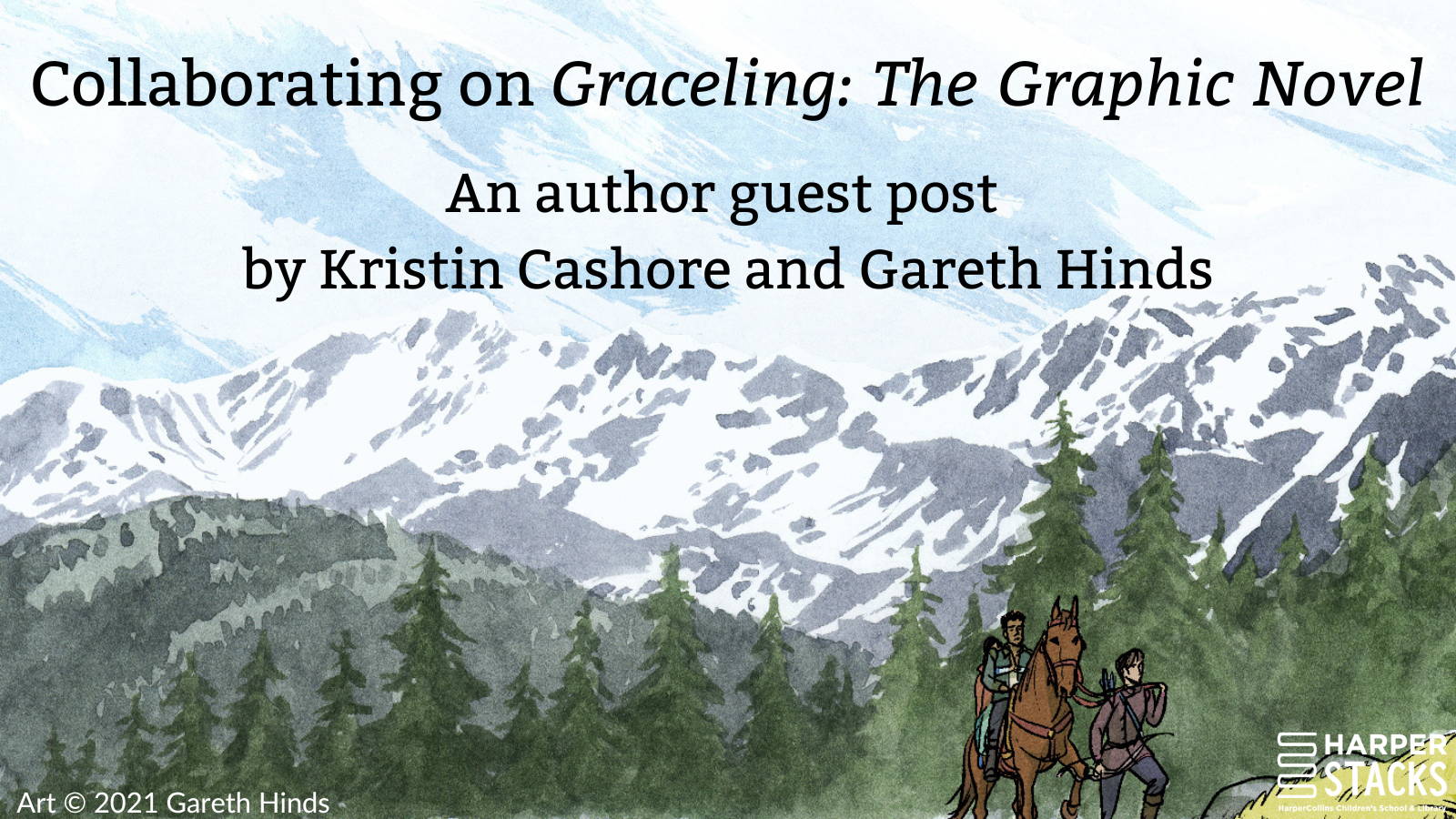 We asked Graceling author Kristin Cashore to chat with Gareth Hinds about their work together creating the graphic novel adaptation of Kristin's award winning novel.

Gareth: I love the idea of working toward moments of joy. I wouldn't have described it that way, but there were definitely things I was looking forward to drawing. The travel through the mountains was the main one, closely followed by the fight scenes. I love drawing landscapes and action, and Graceling contains a lot of both!

There are always some moments of tedium, usually having to do with repetitive drawing of fiddly costumes – the best examples probably being the first two throne room scenes. Also there was a moment of pain and catharsis that caught me off guard, which was when I was drawing a certain character falling from a cliff. It hadn't occurred to me that that was going to be really hard, because I lost a very dear friend to a canyoneering accident a few years ago -- the book is dedicated to her. I've never actually wept at something I was drawing before, but the day I drew that scene I was a mess.

Sorry to start out so heavy. Let me ask you, what was your favorite part (scene or character or aspect) of the story to see adapted into a visual medium? What were you most excited to see me draw?

Kristin: Oh, Gareth, I’m sorry about your friend. And about the way that scene took you by surprise. For what it’s worth, that spread, in my opinion, is one of the most heart-wrenching, startling, and gorgeous in the whole book. It’s one of the pages I turn to first.

To answer your question, will it give you a tedium flashback if I tell you that one of my most delightful moments was when you sent me a drawing of all of the characters standing in a row, wearing their fiddly costumes? I squealed in delight to see everyone together — your interpretation of my characters. When I’m writing, I don’t really see them. I feel them. So it was fascinating to see how you saw them, plus they all looked great.

In terms of favorite parts of the finished book, my favorite moments consistently are the quiet ones, where somehow, despite needing to cram a 450-page, plot-rich novel into a much shorter form, you found ways to make space for the characters to reflect, or sleep, or quietly watch something happening, or perform some action in solitude and silence. There’s so much feeling in those moments!

This might be a basic question, but I’m really curious: Did you create the art starting at the beginning of the book and going on to the end? That’s how I write my books, always, but you and I are practitioners of two very different arts. Do you jump around the book, or move forward from the beginning? Sneaking in another question: Either way, does it take you a while to feel like you know who your characters are?

Gareth: I usually draw from beginning to end, mostly because it’s easier to keep track of my progress that way. People are familiar with the idea that movies are often shot out of order, but that’s because of the availability of actors, locations, etc. I don’t have concerns like that, so the only reason I might do things out of order is if, for instance, I was stuck on a scene, I might skip ahead and give myself some time to consider alternate solutions, or if I wanted to get a later scene worked out because it might affect how I draw an earlier scene. But that’s pretty rare, and I can’t think of an example in Graceling.

I should note that I draw the whole book in rough sketches first before I go back and draw the final art, so I’ve sort of gone into the future and worked out the visuals at a broad level for the end before I get into details of the beginning, if that makes sense. 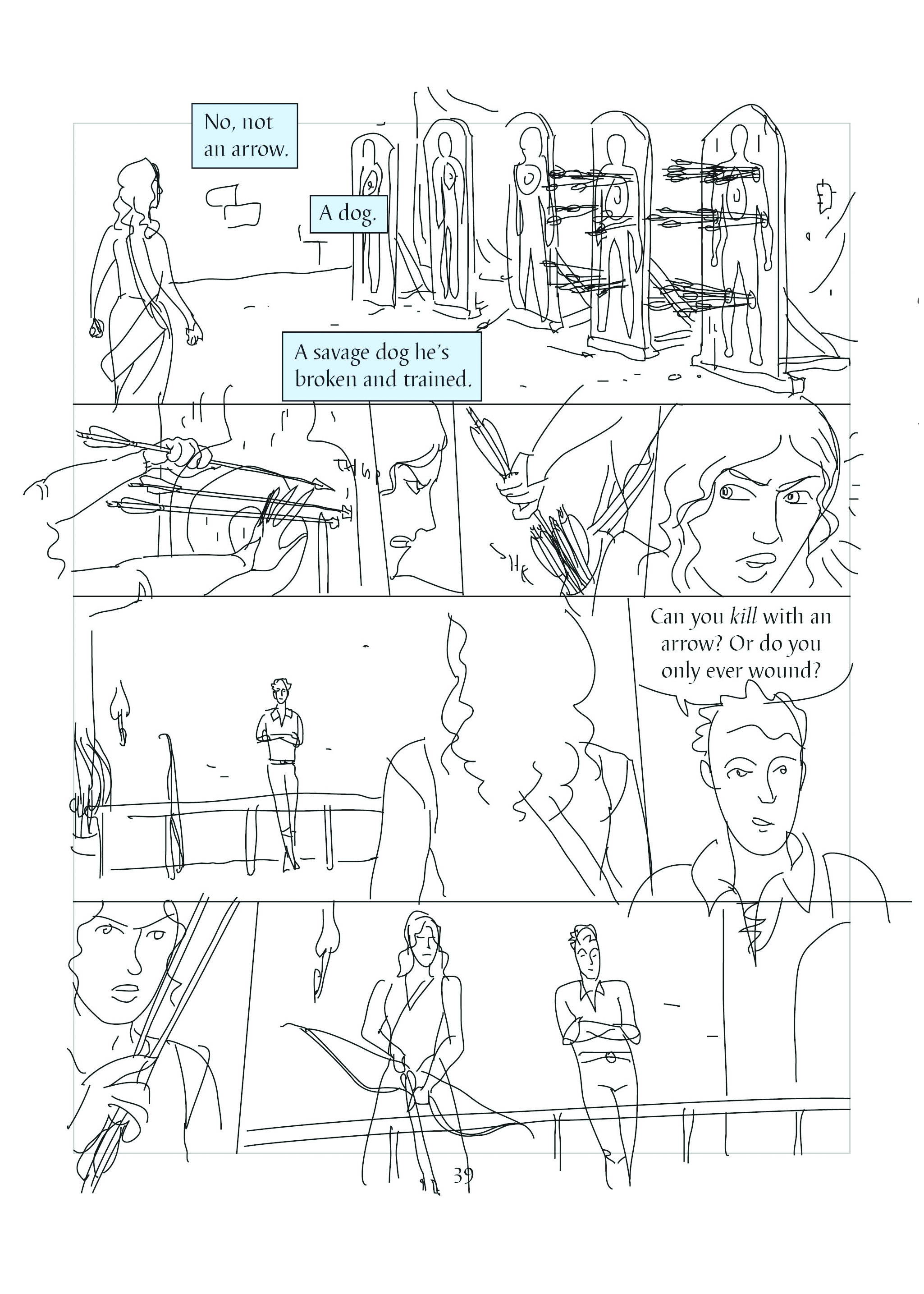 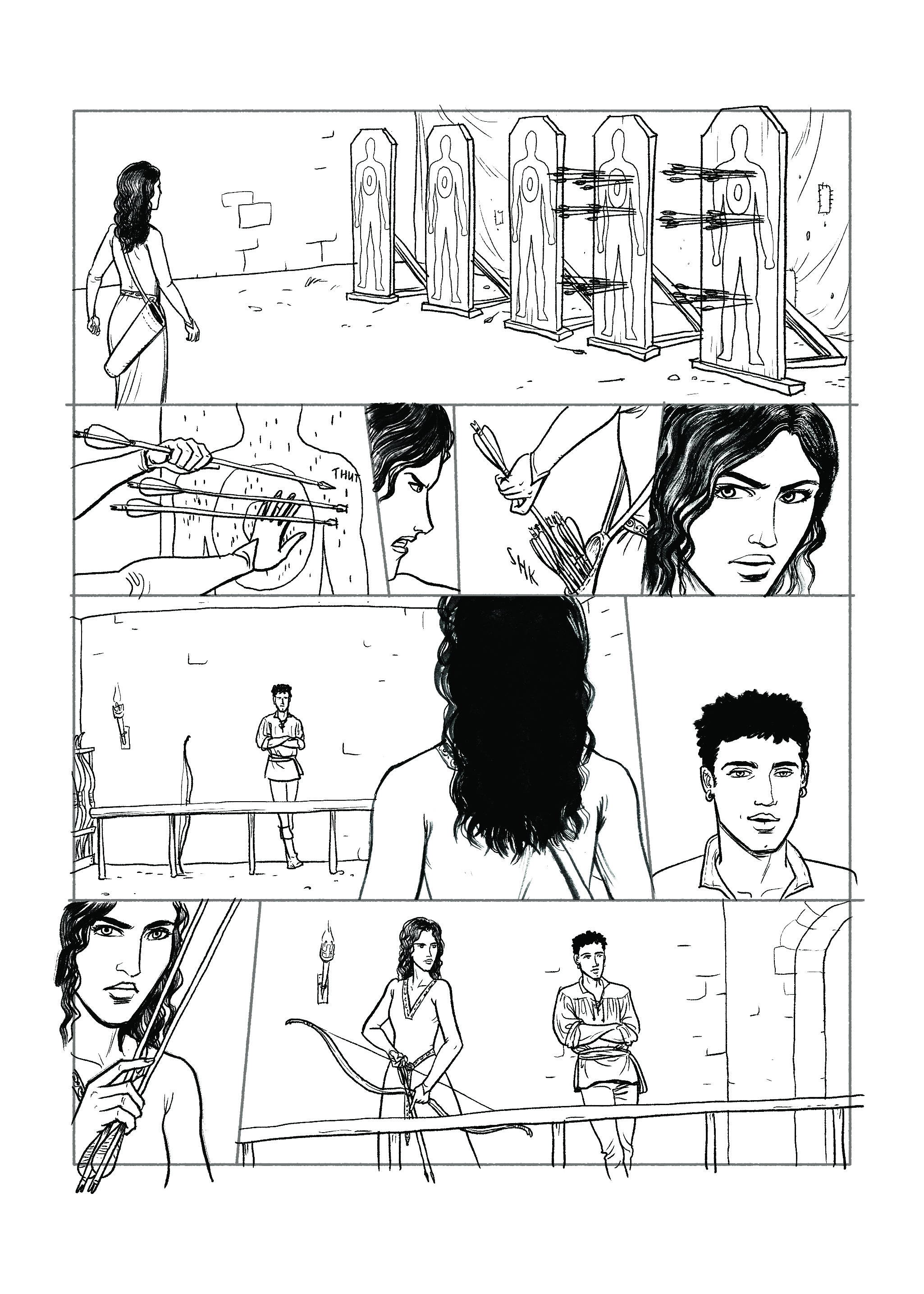 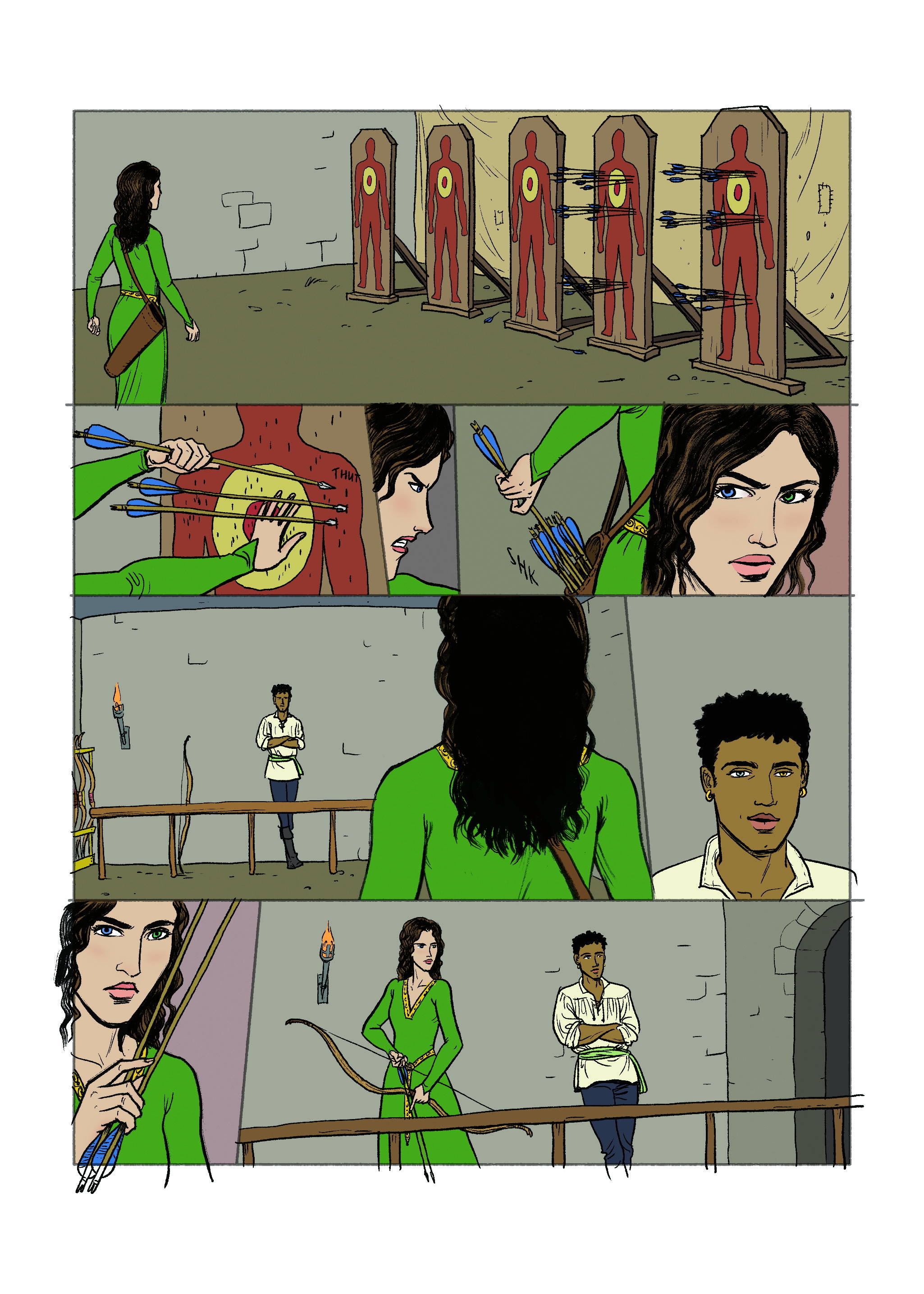 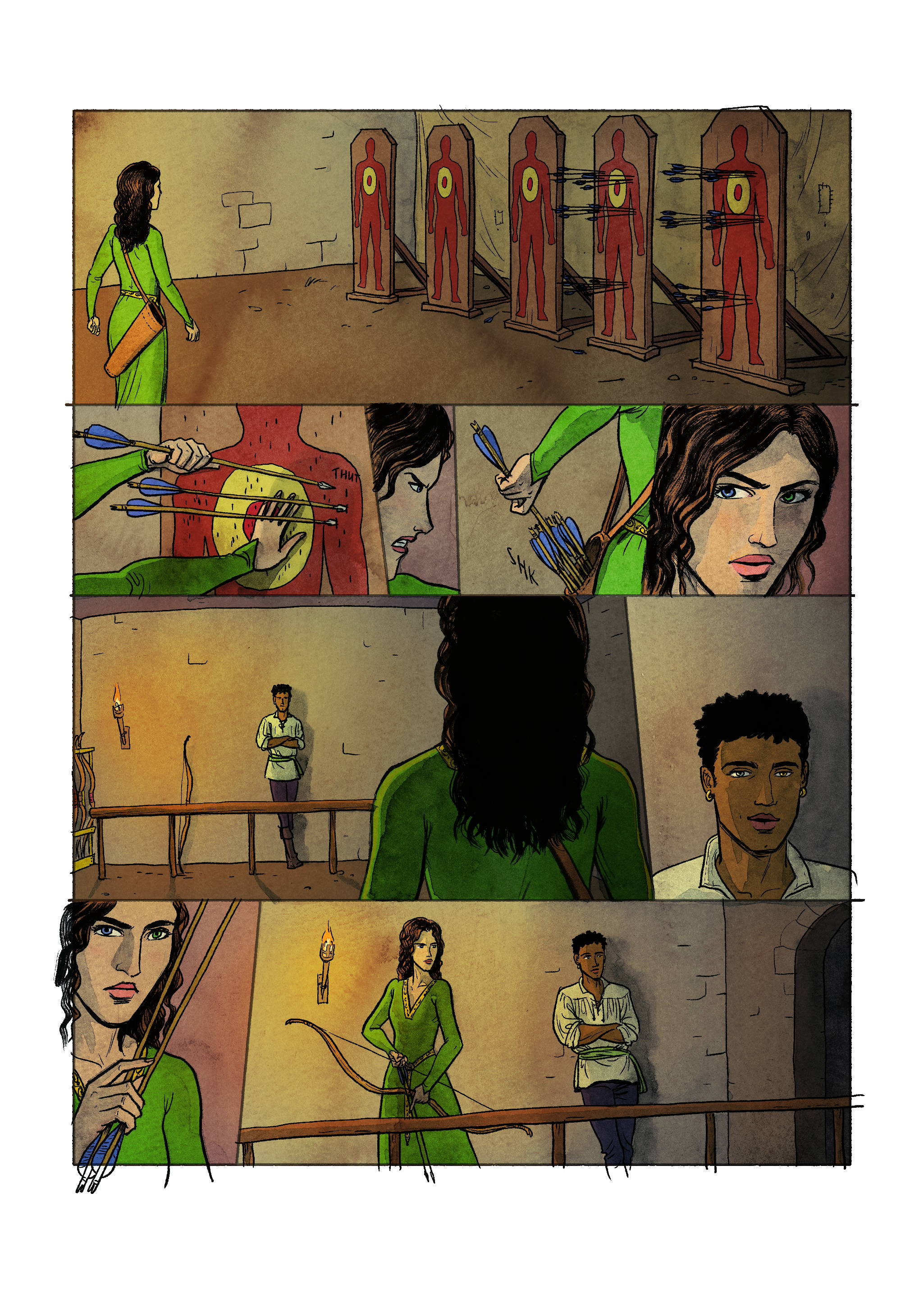 I also think ahead in terms of character design, which touches on your second question. For instance I knew I needed to design several outfits for Katsa: her “ninja” outfit for the opening, the two dresses we see her wear, her official uniform as Randa’s enforcer, and her traveling clothes. But some outfits I don’t figure out until I get to them, like her boat outfit or her winter furs.

It does take a while to learn how to draw each character – in fact even by the end of a book I still have some trouble keeping them totally consistent, so I have to go back and edit faces quite a bit – but there’s a lot more of that in the early parts of the book, the period when I was still figuring out how to draw these people.

That leads to a question I have for you: how do you find the voice of your characters (and how do you write such good dialog, if that’s a separate question)?

Kristin: Oh, yes, I remember a moment near the end of the process when you asked me to review a draft for the express purpose of letting you know if I thought any of the faces looked wrong!

In terms of how I find the voice of my characters, it sounds like maybe there are some parallels to your process: I figure out some parts of it beforehand, but for the most part, I find my characters’ voices through the process of writing them. There’s a WHOLE lot of: writing; sitting back; reading what I’ve written; gauging whether it sounds and feels right; making large or small modifications; sitting back, reading what I’ve written; gauging how it sounds; etc. During the gauging part of the process, I’m asking myself a lot of questions. Some examples: Does this character feel like the character I meant to create? If not, is it a problem? Do I want to modify her a little bit, or go with this person she seems to want to be? Will this person I’m creating fit into the plot I have planned for her? — It’s a lot of finding the balance between structure and flexibility!

It’s a similar process with my dialogue (and thank you for that compliment!). With each scene, I have a plot direction, a place I need the conversation to go, but I’m always constantly asking myself, “But what would this person actually say in this moment?” It’s critically important that characters be allowed to behave the way they would behave. Since I also have a specific story I’m trying to tell, it’s a process of finding the way to allow the characters to be whoever they are — and speak however they would speak — within the plot structure I have planned for them.

Your two questions are quite connected, actually, because one of the easiest ways for me to find my characters’ voices is to get them talking, and see what they say! I learned a lot about Katsa and Po by throwing them into situations where they needed to interact with each other, and seeing how they responded to each other.

Gareth, it was such a joy to be allowed to keep you company while you adapted Graceling so beautifully. Thank you, and thanks for this conversation!

Gareth: And it was lovely to work with you and your story. It was a lot of work, but I really enjoyed the process and I’m proud of the result! 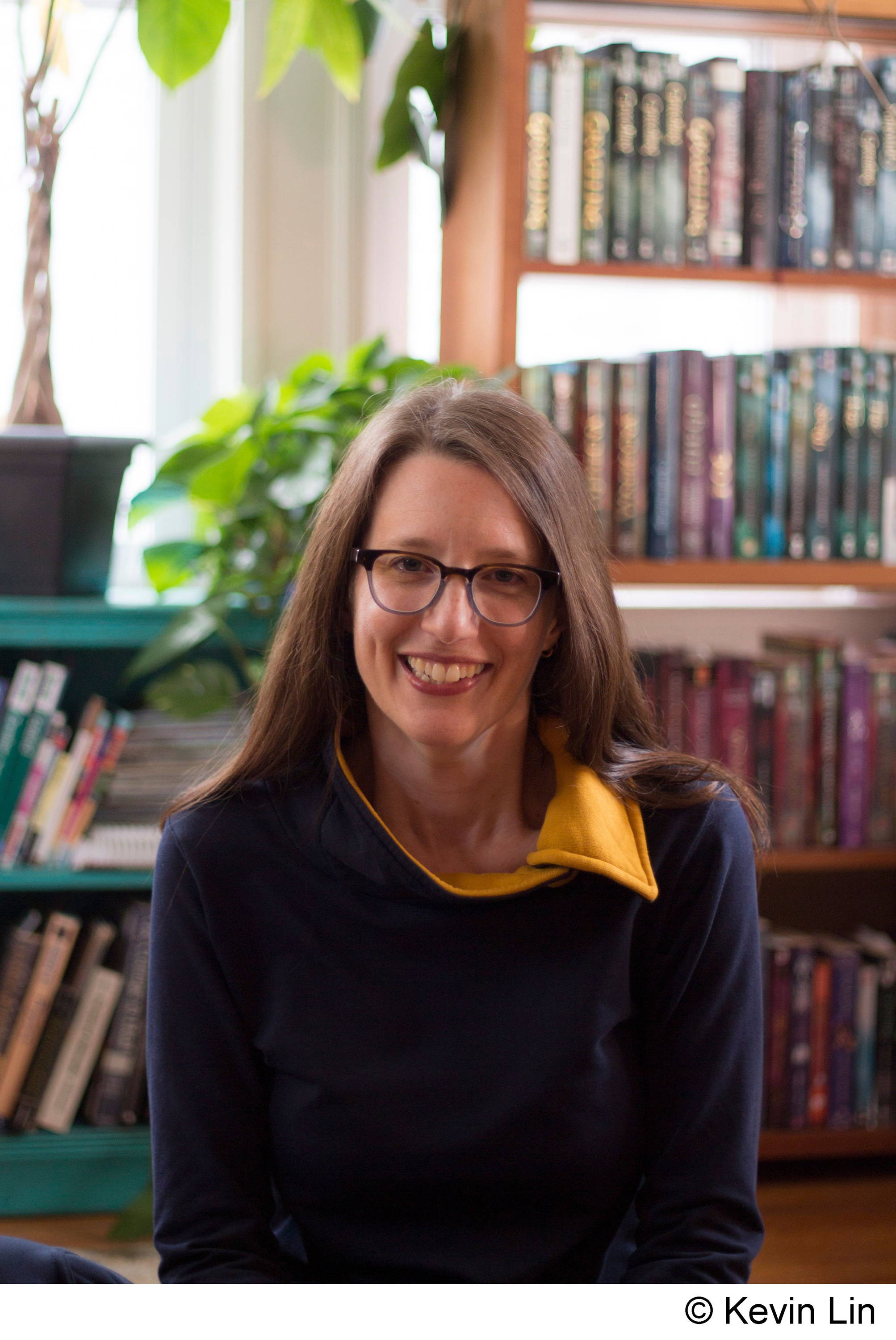 Kristin Cashore is author of many New York Times best-selling books, including Graceling, Fire, Bitterblue, and Jane, Unlimited. She received a master's from the Center for the Study of Children's Literature at Simmons College, and she has worked as a dog runner, a packer in a candy factory, an editorial assistant, a legal assistant, and a freelance writer. She currently lives in the Boston area. kristincashore.blogspot.com, Twitter: @kristincashore.

Gareth Hinds is the creator of critically acclaimed graphic novels based on literary classics, including Beowulf, King Lear, The Merchant of Venice, The Odyssey, Romeo and Juliet, and Macbeth. He is a recipient of the Boston Public Library’s “Literary Lights for Children” award. He lives in Maryland. garethhinds.com, Twitter: @garethhinds, Instagram: @gareth.hinds 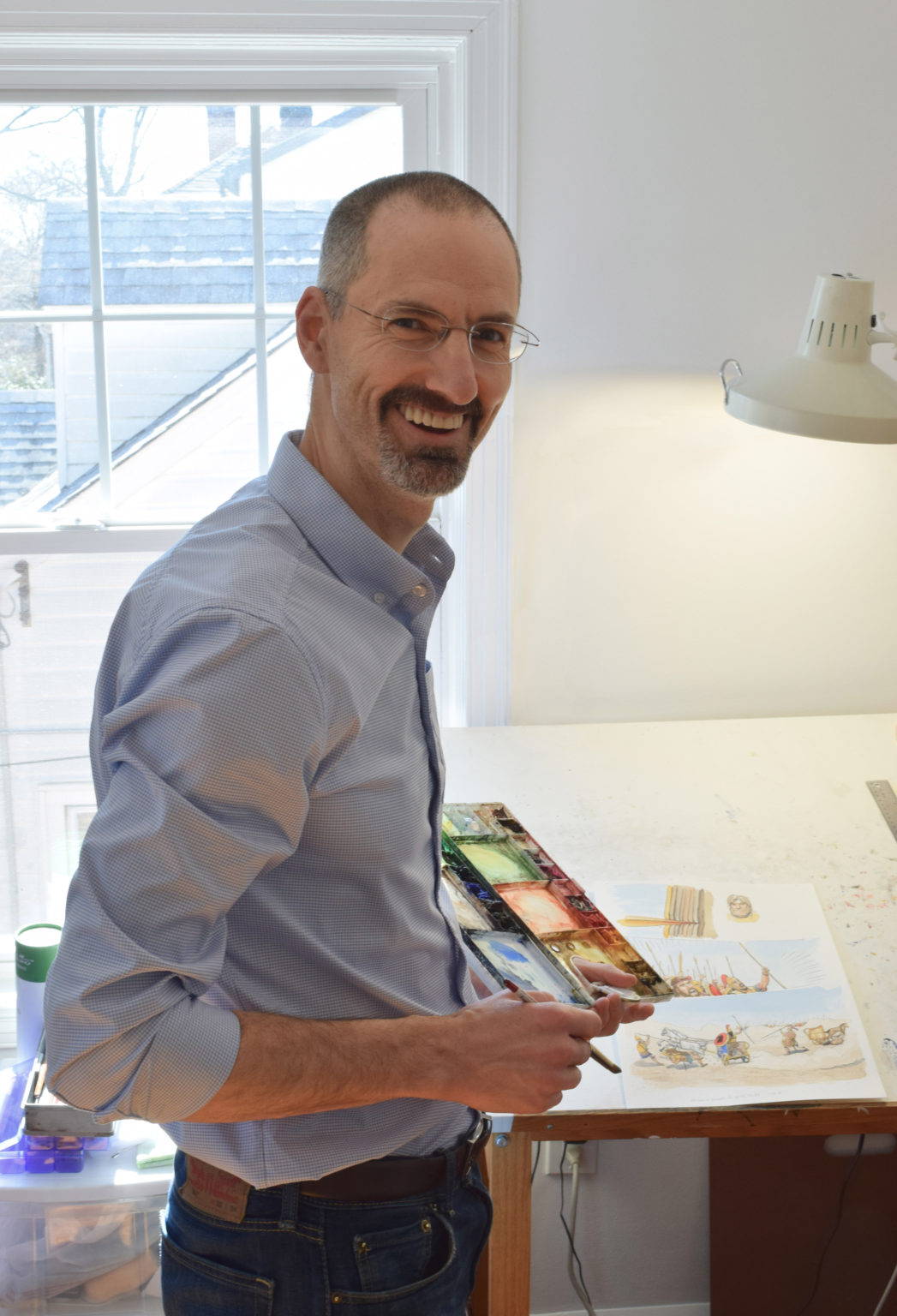 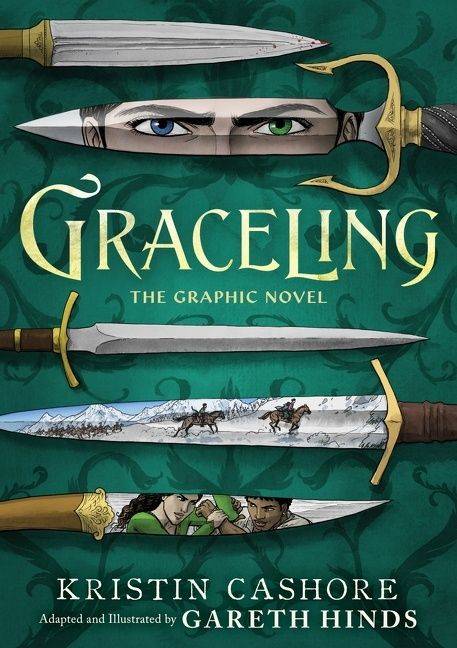 Katsa is a Graceling, one of the rare people born with an extreme skill. As niece of the king, she lived a life of privilege until the day her ability to kill a man with her bare hands revealed itself during a royal banquet. Now she acts as her uncle’s enforcer, traveling the kingdom and threatening those who dare oppose him.

But everything changes when she meets Po, a foreign prince Graced with combat skills who is searching for the truth about his grandfather’s disappearance. When Katsa agrees to help him, she never expects to learn a new truth about her own Grace—or about a terrible secret that could destroy them all.

With "gorgeous storytelling" (School Library Journal, starred review) and characters "crafted with meticulous devotion" (Kirkus, starred review), Graceling is a beloved classic that has continued to resonate with readers for over a decade.

Praise for Graceling: The Graphic Novel

"This gorgeous adaptation of Cashore’s bestselling novel maintains all of the action, suspense, and romance of the source material." — Booklist

"This is at its heart much more than just an adventure story: It is a story that looks at consent and power over others and a romance between two people dealing with the ways control over themselves affects the larger world—and their hearts as well.... An adaptation of a YA classic that is sure to draw in new fans." — Kirkus Reviews

"The action is terrific, the story is well-developed for readers unfamiliar with this world, and the ethical questions raised... are compelling and handled with nuance. The true heart of this version, however, are the illustrations themselves. Hinds trusts readers to find meaning in silences, sometimes pages long, and hover there, soaking in subtle gestures that tell the story as much as the fast-moving action scenes." — Bulletin of the Center for Children’s Books