I’m a Muslim American immigrant, and my children are Americans who were born in the U.S. and raised through the lens of the worst terrorist attack on the U.S. Yet for the longest time, it never occurred to me that my story had any value. As a college student in the immediate aftermath of 9/11, with the entire nation reeling from grief and shock, I never considered that my saga was just beginning. The saga of the Muslim American community as a whole, year after year after year.

I watched as we waged war on two countries innocent of everything except sharing a religion and culture with our attackers. I watched as our government created regulations like airport screening that “randomly” selected people like my husband every single time. I watched as newspapers revealed secret surveillance of mosques by police departments. I watched as my people—friends, family, fellow Muslims—were treated with suspicion and prejudice.

In all of this, I remained silent, as did many Muslims I knew. We needed to show our assimilation, to prove our loyalty. Like so many others, I did this by becoming an interfaith activist, inviting people in my community to dialogue, dinner, and even worship. I spoke about being Muslim—how good and positive it was, how happy we were to be welcomed into American society. And I prayed that things would get better. That I could go back to just being Saadia Faruqi one day. Not Muslim, or Pakistani American, or immigrant. Just Saadia.

That never happened. But when I became a mom, and my kids started school, things changed for me personally. I watched my son being bullied for his name and his religion. I watched my daughter struggle to read books about white kids who she couldn’t relate to. I tried to find words to explain things to my kids when hate crimes occurred, or when the news media maligned us for no reason. That’s when I realized that I wasn’t powerless. I had my words, my stories, and I could use them to counter the inaccurate representation of my faith. Each of my books, from the first Yasmin story to the latest middle grade novel, aims to do just that: tell the story of Muslims living in the U.S., surviving and thriving despite the bigotry thrown their way. With Yusuf Azeem Is Not a Hero, however, I went beyond my regular portrayals. It’s been twenty years since 9/11 and my exhaustion knows no bounds. This story is meant to blow holes in everyone’s perceptions, perhaps because of how I feel. I’m sad at how things have remained the same over the years. I’m angry at the way I’ve lived for twenty years, always trying to prove my worth.

This story contains every single thing the Muslim American community has faced with a smile on their faces for twenty years, and the list is long. Prejudice. Hatred. Suspicion. Name-calling. Obstruction of mosques. Obstruction of self. Vandalism. Violence. There are characters who pretend everything is okay, when it’s not. There are characters who say “never forget” like a mantra for holding onto lies. There is Yusuf, who just wants to be a regular kid and win a robotics competition, yet he ends up a hero for an entire community.

I think of my son, who is now fifteen. He was randomly selected in airport security screening this summer as we returned from a vacation. It’s the first time it’s happened to him, but he knows it well because he’s seen his father and uncle and so many other Muslim males go through the same thing. Yusuf in my book is inspired by my son, born years after 9/11 but still feeling the effects of it, wanting to keep his head down and avoid trouble but not having a choice to do that.

If you wish to learn about the attacks on 9/11, you should make sure you get information about this event from all the angles. If you’re an educator or a librarian, you should ensure that you include all perspectives in your discussions. Not only what happened that day to the victims, but also how our society changed for the worse in many ways that have lasted until now. Political decisions. Cultural shifts. Community angst. In the book, Yusuf reads his uncle’s journal from 2001 and realizes that history has a lot to teach us, especially if we’re still living through the repercussions decades later.

The best thing about Yusuf Azeem is Not a Hero is that it’s actually a very hopeful story. As I was writing the book, something shifted within me. My anger at how things have been was replaced by hope at how things could be in the future. I put all my experience from my interfaith work into the story, and offer a path forward for educators, parents, and community members. Especially for my young readers, who weren’t alive during 9/11 but wish to understand and accept their Muslim American friends now. This story will show you a way to be allies and welcome the “other” with open arms and hearts.

Praise for YUSUF AZEEM IS NOT A HERO

"A timely, emotional story full of hope and love even in the face of discrimination and prejudice."   — Kirkus Reviews

"Faruqi effectively probes complexities of radical activism vs. peaceful accommodation as Muslim response to prejudice, as well as the non-Muslim community’s deep discomfort in stepping beyond a bystander role in defense of their neighbors."   — Bulletin of the Center for Children’s Books 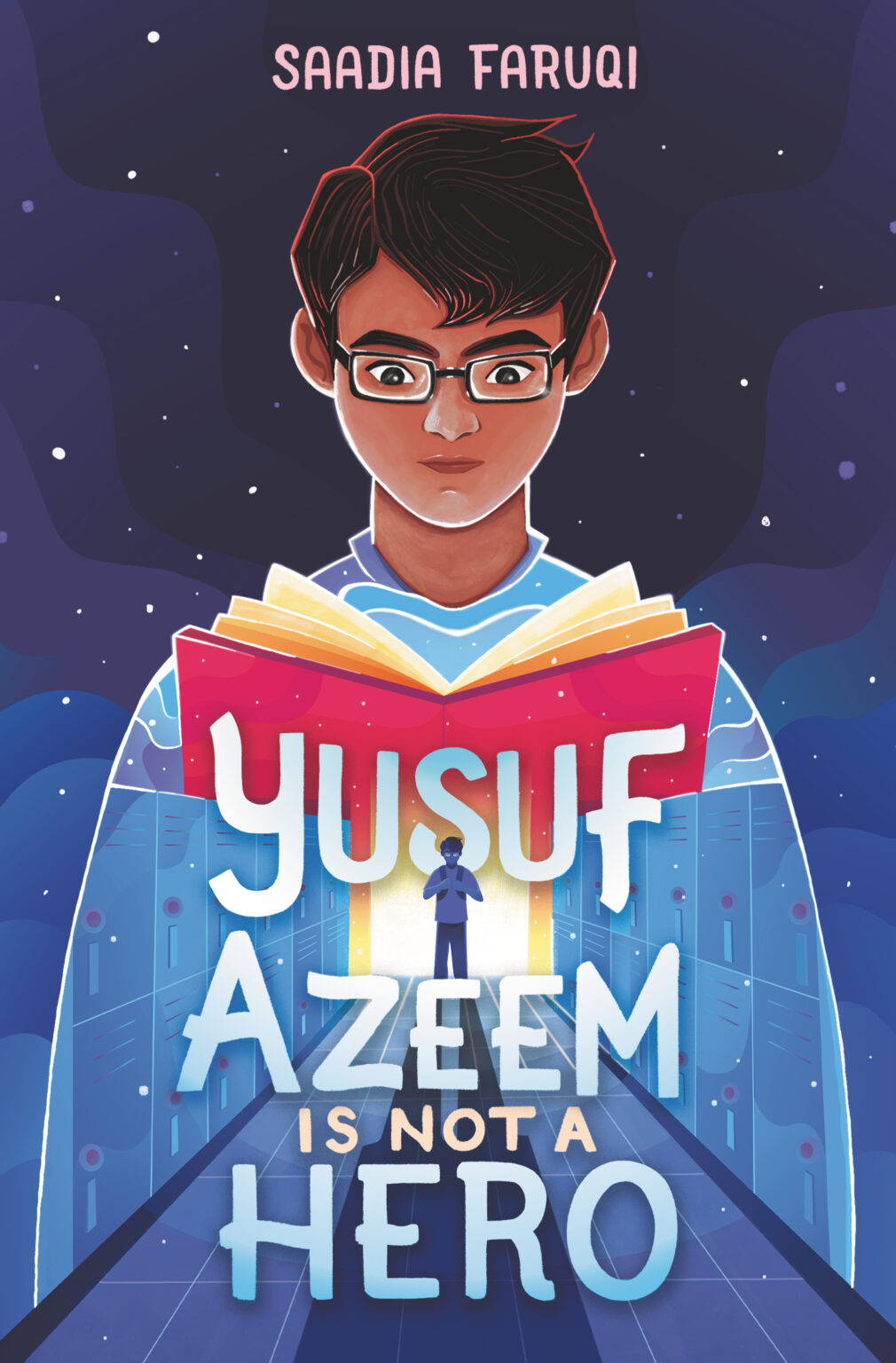 Yusuf Azeem has spent all his life in the small town of Frey, Texas—and nearly that long waiting for the chance to participate in the regional robotics competition, which he just knows he can win.

Only, this year is going to be more difficult than he thought. Because this year is the twentieth anniversary of the 9/11 terrorist attacks, an anniversary that has everyone in his Muslim community on edge.

With “Never Forget” banners everywhere and a hostile group of townspeople protesting the new mosque, Yusuf realizes that the country’s anger from two decades ago hasn’t gone away. Can he hold onto his joy—and his friendships—in the face of heartache and prejudice? Saadia Faruqi is a Pakistani-American writer, interfaith activist, and cultural-sensitivity trainer. She is the author of the children’s early-reader series Yasmin, the middle grade novel A Thousand Questions, and the coauthor of the middle grade novel A Place at the Table. She was profiled in O magazine as a woman making a difference in her community and serves as editor in chief of Blue Minaret, a magazine for Muslim art, poetry, and prose. She resides in Houston, TX, with her family.